skip to main | skip to sidebar

First of all, I realize it's been a while since I posted. I went out of town for a business trip and was lucky enough to have met someone I've admired for sometime now. And I've tried to read and watch anything and everything he's ever done. Robert X. Cringely has written for InfoWorld and has hosted several TV shows on PBS that can be found from the link on his name. I particularly like Triumph of the Nerds where he takes a look at the people who made the computer industry what it is today. Bob is knowledgeable and funny. I have learned a lot from him over the years. And it was a great pleasure to have met him. Here is the proof! 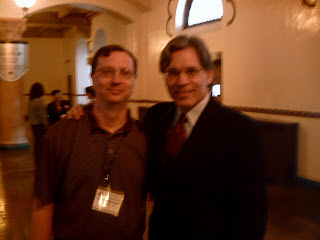 Sorry about the picture being blurry. I wish I had seen it before leaving him. And I'm hoping someone out there that knows something about fixing stuff like that can fix it. Or, maybe I'll get the chance to meet him again. Maybe I'll email him and see if he'll mind it!

He was at the conference I was attending to talking about the future of libraries, and more specifically, the future of technology in libraries. As expected, it was a great talk. I had no idea that he was the one responsible for creating the trash can (for the mac, the recycle bin on windows) that is on your desktop. In fact, I had no idea that he was so involved in the beginning of Apple. Maybe he mentioned it in Triumph of the Nerds, but it's been a few years now and I don't remember if he did. Time to watch it again!

Supposedly there are two Robert X. Cringely's out there according to this. But I'm not buying it. This is just the kind of thing that he'd think was funny. And it is. Be sure to check out everything he does. I'd highly recommend it, and well worth your time. You can find his blog at PBS here, and his blog at Infoworld here.

And no, I STILL can't believe I met him. I have to look at the picture everyday just to believe it!

Ronnie
Grew up in Wilmington, NC. Attended John T. Hoggard highschool, and Harding University for college. Married in 1988. Moved to MI in 1999. My wife is from MI.